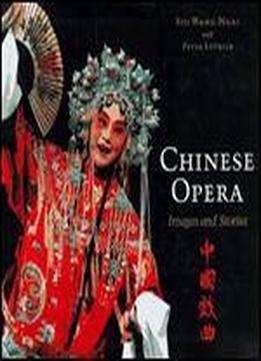 In Chinese Opera brilliant photographs by Sui Wang-Ngai introduce the reader to a unique theatrical form. Dramatic, full-color stage photographs of individual actors and dynamic action shots, taken in natural light at live performances in Hong Kong, capture gestures and facial expression to convey the theatrical moment while simultaneously pointing to the differences in costuming and presentation that distinguish each regional style and character. Chinese opera is a blend of song, speech, mime, dance, and acrobatics held together by a language of theatrical conventions entirely new to the Westerner. It is based on a rich repertoire of stories drawn from the history, legends, myths, folk tales, and classic novels of the country, here engagingly retold by Peter Lovrick. Full of colorful characters and surprising events born of the imagination of ancient culture, these stories live on as part of the Chinese theatrical tradition. The plays are organized in groups to give an idea of the Chinese "chain of being" or social structure from heavenly beings to emperors, common folk to ghosts. A short preface to each section provides important insights into traditional society. A brief anecdotal history of the development of Chinese opera is also included, as is a list of English-and Chinese-language references. Chinese Opera offers an evocative and fascinating glimpse of Chinese cultural life.