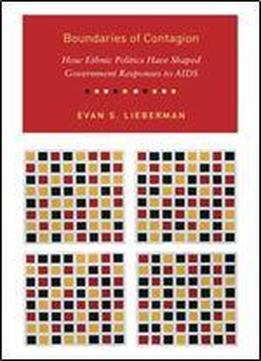 Why have governments responded to the HIV/AIDS pandemic in such different ways? During the past quarter century, international agencies and donors have disseminated vast resources and a set of best practice recommendations to policymakers around the globe. Yet the governments of developing countries in sub-Saharan Africa, Asia, Latin America, and the Caribbean continue to implement widely varying policies. Boundaries of Contagion is the first systematic, comparative analysis of the politics of HIV/AIDS. The book explores the political challenges of responding to a stigmatized condition, and identifies ethnic boundaries the formal and informal institutions that divide societies as a central influence on politics and policymaking. Evan Lieberman examines the ways in which risk and social competition get mapped onto well-institutionalized patterns of ethnic politics. Where strong ethnic boundaries fragment societies into groups, the politics of AIDS are more likely to involve blame and shame-avoidance tactics against segments of the population. In turn, government leaders of such countries respond far less aggressively to the epidemic. Lieberman's case studies of Brazil, South Africa, and India three developing countries that face significant AIDS epidemics are complemented by statistical analyses of the policy responses of Indian states and over seventy developing countries. The studies conclude that varied patterns of ethnic competition shape how governments respond to this devastating problem. The author considers the implications for governments and donors, and the increasing tendency to identify social problems in ethnic terms.