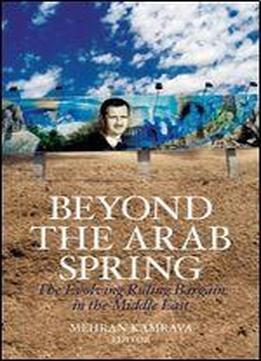 Beyond The Arab Spring: The Evolving Ruling Bargain In The Middle East
Tags: Mehran Kamrava

The Arab Spring occurred within the context of the unraveling of the dominant 'ruling bargain' that emerged across the Middle East in the 1950s. This is being replaced by a new and in- choate system that redefines sources of author- ity and legitimacy through various devices (such as constitutions), experiences, and processes (mass protests, civil wars, and elections), by reassessing the roles, functions, and at times the structures of institutions (political parties and organisations, the armed forces, the executive) and by the initiative of key personalities and actors (agency). Across the Arab world and the Middle East, 'authority' and 'political legitimacy' are in flux. Where power will ultimately reside depends largely on the shape, voracity, and staying power of these new, emerging conceptions of authority. The contributors to this book examine the nature and evolution of ruling bargains, the politi- cal systems to which they gave rise, the steady unraveling of the old systems and the structural consequences thereof, and the uprisings that have engulfed much of the Middle East since December 2010.