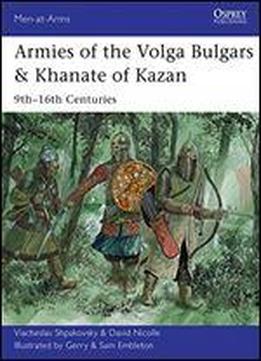 Facing off against Byzantines, Arabs, Vikings, Turks, Mongols, and Russians, this steppe culture dominated Black Sea and Caucasus trade during Medieval times. The Bulgars were a Turkic people who established a state north of the Black Sea, and who showed similarities with the Alans and Sarmatians. In the late 500s and early 600s AD their state fragmented under pressure from the Khazars one group moved south into what became Bulgaria, but the rest moved north during the 7th and 8th centuries to the basin of the Volga river. There they remained under Khazar domination until the Khazar Khanate was defeated by Kievan (Scandinavian) Russia in 965. Thereafter the Volga Bulgars - controlling an extensive area surrounding an important hub of international trade - became richer and more influential they embraced Islam, becoming the most northerly of medieval peoples to do so. Given their central position on trade routes, their armies were noted for the splendour of their armour and weapons, which drew upon both Western and Eastern sources and influences (as, eventually, did their fighting tactics). In the 1220s they managed to maul Genghis Khan's Mongols, who returned to devastate their towns in revenge. By the 1350s they had recovered much of their wealth, but they were caught in the middle between the Tatar Golden Horde and the Christian Russian principalities. They were ravaged by these two armies in turn on several occasions between 1360 and 1431. A new city then rose from the ashes - Kazan, originally called New Bulgar - and the successor Islamic Khanate of Kazan resisted the Russians until falling to Ivan the Terrible in 1552. The costumes, armament, armour and fighting methods of the Volga Bulgars during this momentous period are explored in this fully illustrated study.