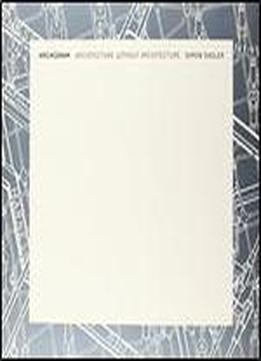 Shortlisted for the 2008 Bruno Zevi Award presented by International Committee of Architectural Critics (CICA). and Winner, Trade Illustrated Category, 2006 AAUP Book Jacket and Journal Show. In the 1960s, the architects of Britain's Archigram group and Archigram magazine turned away from conventional architecture to propose cities that move and houses worn like suits of clothes. In drawings inspired by pop art and psychedelia, architecture floated away, tethered by wires, gantries, tubes, and trucks. In Archigram: Architecture without Architecture, Simon Sadler argues that Archigram's sense of fun takes its place beside the other cultural agitants of the 1960s, originating attitudes and techniques that became standard for architects rethinking social space and building technology. The Archigram style was assembled from the Apollo missions, constructivism, biology, manufacturing, electronics, and popular culture, inspiring an architectural movementHigh Techand influencing the postmodern and deconstructivist trends of the late twentieth century. Although most Archigram projects were at the limits of possibility and remained unbuilt, the six architects at the center of the movement, Warren Chalk, Peter Cook, Dennis Crompton, David Greene, Ron Herron, and Michael Webb, became a focal point for the architectural avant-garde, because they redefined the purpose of architecture. Countering the habitual building practice of setting walls and spaces in place, Archigram architects wanted to provide the equipment for amplified living, and they welcomed any cultural rearrangements that would ensue. Archigram: Architecture without Architecturethe first full-length critical and historical account of the Archigram phenomenontraces Archigram from its rediscovery of early modernist verve through its courting of students, to its ascent to international notoriety for advocating the "disappearance of architecture."