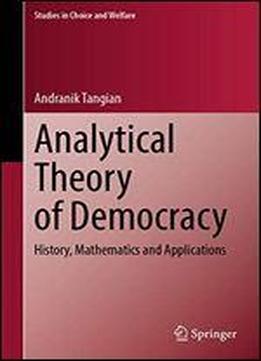 This book operationalizes the idea of political representation, which is fundamental to modern democracies. Both individual representatives and representative bodies are evaluated using the indices of popularity (the average percentage of the population whose opinion is represented on topical policy issues) and universality (the percentage of issues for which the prevailing public opinion is represented). Viewed as objective functions, these indices can aid in the search for optimal representatives and representative bodies. By replacing the consistency analysis of the social choice axioms with the calculation of the best compromises, the paradoxes of social choice, such as those of Condorcet and Arrow, can be overcome. These indices also form the core of an alternative election method that is aimed at enhancing policy representation a recent concept of political representation, which is not supported by the conventional voting systems shaped during the American and French Revolutions. This method is tested in a series of election experiments that focus on implementation details. In addition, non-societal applications such as MCDM, finance or traffic control are considered, where the objects that reflect the properties or behavior of other objects are regarded as their representatives. Given its scope, the book will appeal to political scientists, economists and operations researchers, as well as to politicians interested in improving democratic performance and electoral system design.