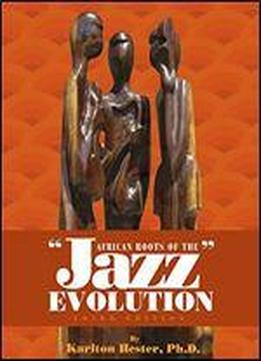 African Roots of the Jazz Evolution discusses how jazz style evolved from its original source - traditional African music. Reflecting the continental interaction and cultural development that took place over centuries, the book explores how melodic, structural, rhythmic, and other musical elements from Africa are manifested in African-American spirituals, the blues, and various jazz forms. The book moves chronologically from the roots of blues music through the advent of recording technology and into the incorporation of new musical styles and electronic media. Beginning with traditional African music, the text examines the sociocultural context in which African-American music emerged and the ways it was traditionally expressed. It also discusses the jazz innovators who emerged in each decade of the 20th Century and their contributions to jazz genres. Featuring reserve and in-class recording, discussion questions, and listening examsAfrican Roots of the Jazz Evolution is an informed exploration of the African-America jazz evolution within a broad sociopolitical context. It can be used in a variety of courses in music, humanities, and ethnic studies. Karlton E. Hester began his career as a composer, recording artist, and music educator. He holds a Ph.D. in composition from the City University of New York, and is currently the director of jazz studies at the University of California, Santa Cruz. Dr. Hester is also the founding director of the Fillmore Jazz Preservation Big Band in San Francisco. He has received fellowships and grants from the National Endowment for the Arts, the New York Foundation for the Arts, and the Mellon Foundation, among other. An acclaimed performer, Dr. Hester has played throughout the United States and internationally.