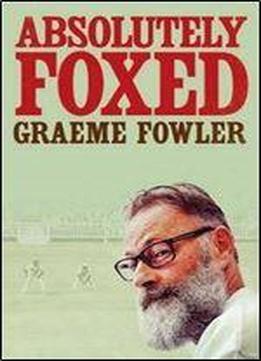 With riotous stories of life on England tours, partying with Ian Botham and Elton John, combined with a moving account of his battle with mental-health issues, Graeme Fowler's Absolutely Foxed is a cricket memoir unlike any other. Seen by many as a maverick, happy-go-lucky figure, Fowler became a hugely influential coach, and is one of the most original thinkers about the game. He's battled and won against the best spinners in India, and the fastest bowlers from the West Indies - he's even found himself at the centre of a tabloid storm. In this book, he looks back over his 40 years in the professional game, spending 16 years on the county circuit with Lancashire and Durham, and three years as an England international - a period that was cut short by a life-threatening injury. He followed that with a spell working on Test Match Special, before running the Durham Centre of Excellence for 18 years. Alastair Campbell provides an Afterword in which he commends Fowler's support for others suffering from mental-health problems Fowler's own experiences should provide help and inspiration for those dealing with similar problems. In his Foreword, lifelong friend Sir Ian Botham describes Fowler as 'one of the gutsiest I ever encountered', but also points out how he 'made a dressing room tick'. Those elements of courage, knowledge and humour are all present in Absolutely Foxed - a truly unmissable read.