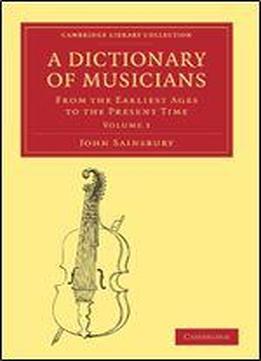 A Dictionary Of Musicians, From The Earliest Ages To The Present Time
Tags: John Sainsbury

The publisher John Sainsbury produced this two-volume biographical dictionary of musicians in 1824. The book, as he acknowledges on his title page, borrows from the previously published works of Choron and Fayolle (in French), Gerber (in German), Orloff (Russian, writing in French), and his two notable English predecessors, Dr Burney and Sir John Hawkings. It contains a 'summary of the history of music', as well as biographies and memoirs of musicians. The range of the information provided is immense, including the most obscure as well as the most famous: fourteen pages on Mozart are followed by paragraphs on his wife Constanza and on the now completely forgotten B. F. Mozin, a French piano teacher and composer, while Beethoven is described when still living and composing, albeit afflicted by deafness. This work is a mine of information on musical life and perceptions of music history in the early nineteenth century.