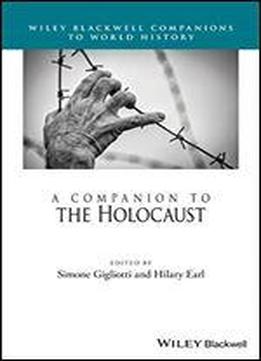 A Companion To The Holocaust
Tags: Simone Gigliotti

Provides a cutting-edge, nuanced, and multi-disciplinary picture of the Holocaust from local, transnational, continental, and global perspectives Holocaust Studies is a dynamic field that encompasses discussions on human behavior, extremity, and moral action. A diverse range of disciplines history, philosophy, literature, social psychology, anthropology, geography, amongst others continue to make important contributions to its scholarship. A Companion to the Holocaust provides exciting commentaries on current and emerging debates and identifies new connections for research. The text incorporates new language, geographies, and approaches to address the precursors of the Holocaust and examine its global consequences. A team of international contributors provides insightful and sophisticated analyses of current trends in Holocaust research that go far beyond common conceptions of the Holocausts causes, unfolding and impact. Scholars draw on their original research to interpret current, agenda-setting historical and historiographical debates on the Holocaust. Six broad sections cover wide-ranging topics such as new debates about Nazi perpetrators, arguments about the causes and places of persecution of Jews in Germany and Europe, and Jewish and non-Jewish responses to it, the use of forced labor in the German war economy, representations of the Holocaust witness, and many others. A masterful framing chapter sets the direction and tone of each sections themes. Comprising over thirty essays, this important addition to Holocaust studies: Offers a remarkable compendium of systematic, comparative, and precise analyses Covers areas and topics not included in any other companion of its type Examines the ongoing cultural, social, and political legacies of the Holocaust Includes discussions on non-European and non-Western geographies, inter-ethnic tensions, and violence A Companion to the Holocaust is an essential resource for students and scholars of European, German, genocide, colonial and Jewish history, as well as those in the general humanities.